I was on the roof when Austin asked if I wanted a ride to the temple. I asked him what time it started, he said “eight o’clock”. “Oh crap”, I said, “I thought it started at nine, I gotta go!”

That’s great, I thought as I climbed down the narrow ladder from the roof of my camper, I am going to be late to my new life. So I quickly changed my clothes, hopped on my bike and started pedaling through the deep playa dust. Before the man burned it was pretty easy to navigate to the temple, you just found the man jutting out of the dry lake bed and aimed a little to the right. Now I had to follow the 15,000 bicycles, art cars and e-transporters that were all traveling roughly in the same direction. 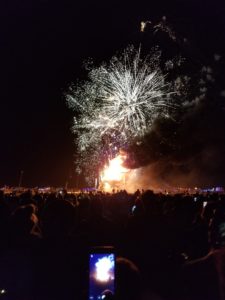 When the man burns it is a huge celebration and collective fuck you to the status quo. There are hundreds of art cars, tens of thousands of people, loud music and a lot of partying. The vast playa fills with people. In the darkness all are riding bikes or on various forms of mutant vehicles, and everything is lit. Thousands of flashing, glowing and thumping vehicles and people traveling towards the center of Black Rock city. It is like watching fireworks in reverse, the explosion converging on the center.

As this event has gotten larger it has taken on more of a festival atmosphere. Its anarchic nature and embracing of art can be overshadowed by our commodity driven world.  Instagram influencers’ pose before the artwork, branding their look and selling their products. More and more there are high end RV villages that house the rich and famous. These look more like sterile well guarded compounds than the open camps and villages that they have displaced. On the playa the young and wealthy, sporting Gucci costumes, are effortlessly propelled through the dust and darkness on electric bikes and half million dollar art cars.

This is a more somber affair. It adheres to a tradition that engenders reverence and respect. Because of this and the tactical advantage of leaving the Black Rock early, (avoids the traffic jam during exodus), the Temple burn is not as well attended.

The temple serves as a ceremonial place to say goodbyes, to let go, to invite the new in. This year I had done all of these. Over the week I had written a series of letters to things I needed to say goodbye to and things I wanted to invite into my life. One clump of these letters had left me profoundly moved. I had sat in the middle of the temple with tears, and loss, and some regrets. I had decided that this opportunity to be here, to participate in this infant ceremony, was were I would delineate the start of my new life.  What better way and place than a public display of grief in a place where judgement and money had been traded for personal exploration and gifting.

And it was looking like I might be late to my new life. The temple burns exactly on time, whereas the man burns after all the hoopla ends. I found the temple, (it was not difficult). And made my way to a spot on the perimeter. The moment I sat down the fire began at the South end of the temple. With help from accelerants and a lot of wood, the temple was completely engulfed in flame within minutes. 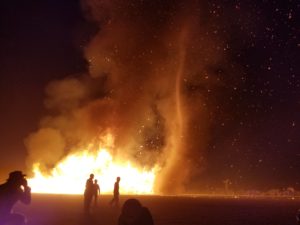 Fire has a life of it’s own

The radiant heat from the flames forced the people in front of me to stand and move back. This gave me an unobstructed view of the burn. As the temple burned, it ignited the tens of thousands of letters and offerings. This shot the remnants of these intents into the column of hot air. These flaming particles created a constellation of twinkling burning lights high in the sky. I was spellbound as I realized that the universe of tiny flaming embers carried into the clear desert air our collective prayers, hopes, love, pain and loss. 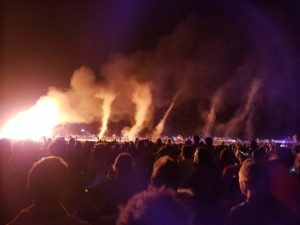 Then came the elders.  Some Paiutes had told me the night before that dust devils were believed to be their ancestors, come to visit. As the fire burned the wooden temple it birthed flame devils. One after another they carried flame, embers and dust as they marched out of the fire and onto the playa. All going east with the wind. The flaming blessings, the parade of elders, the fires impervious radiant heat were met with a an eerie quiet. The temple burn tradition is that it is done in silence and with reverence. But with this procession of elements, ancestors, and intents, the people at times fell to howling, then silence punctuated with emotion.

Is it possible every day, to start over?  To release to the Universe the things that are out of our hands and move forward with intent and reverence? Would this be easier to do if you knew you were about out of time?

This celebration, indulgence of art, love, life and chaos defies description.  Try as I might, the description eludes me, and as soon as I think I have a handle on what it is all about, it changes.  Like the universe of burning prayers, dreams and intents that were released into the night sky, not one of them the same; this event is as diverse as each participant. The definition of the whole is the sum of its parts and cannot be captured in a sentence or a paragraph. And that is my life and your life. To show up, give up judgment, embrace generosity, to have the gift of change, to be able to make different mistakes and be able to start over.  This defies description because there are more pieces to come.