The road had become hostile.  Traveling North through Utah I had been wondering about the huge, brown, low hanging cloud in the distance. As I got closer the winds picked up.  The gusts started hitting the truck like waves in the ocean. As they slammed into the truck we would rock back and forth and it was a struggle to keep the truck in its lane.  The goal was to reach Nevada, so we kept going. We drove slowly hoping the wind would not tip us over or push us into a ditch. Eventually we reached highway 50 and turned West.  This brought us into Nevada and it was time to find a place to spend the night. A quick internet search brought up Great Basin National Park.  It also brought up an obscure article named, “Prometheus, killing the oldest living thing” .

Glad to have shelter from the relentless gusty wind, we decided to spend the night in the park. I had been working to advocate for the return of fire to the environment and for its use as a restoration tool. Because of this, the term, “Prometheus”, caught my eye. Prometheus is a Greek God who brought down the wrath of Zeus by helping humans.  He did this in several ways, but most notably, he stole fire from Mount Olympus and gave it to the human race.

Much of this country is above treeline and the climate is very harsh. Even though it is a difficult environment to live in, it is home to a diversity of plant and animal life. Quaking aspen, mountain mahogany and small, cold, clear streams punctuate the rocky ancient landscape. There are cougars, bobcats, marmots, rock squirrels, and mountain sheep. Other animals that can be found here are elk, mule deer, spotted skunks, shrews, ringtail cats, and ermine.  The weather can be extreme, and can change in the blink of an eye.  The park is busiest in the summer after the majority of the snow has melted. Cold winters and hot summers make this an area of contrasts.

This high place, with its harsh beauty is the unique environment of the Bristlcone Pine.

Gnarled and stunted, bristcones mostly live at high elevation.  The trees grow in six states and the best known groves are in the White Mountains of Eastern California.  The White Mountain groves of bristlecones are a favorite for academics and scientists studying the climate and the environment.  These trees were thought to be oldest living things. The White Mountains are popular and relativley easy to acess.  Because of this and the acknowledged scientific value of these groves, the trees and area where they live is protected.

There are lesser known groves in Great Basin National Park. In the shadow of Wheeler Peak there is a grove that was home to a bristlecone pine tree named Prometheus.  There was a small group of people who frequented this area. They knew it was a special place and because of that, they had named many of the trees. This is how Prometheus had been named. Unfortunately, the groves in Great Basin National Park did not have the same protections of those in the White Mountains.

In 1963 a graduate student field researcher named Donald Currey was working on understanding how climates change over time. Mr Currey became convinced that the trees living in the white Mountains below Wheeler peak were very old. His plan was to utilize them to gather data for his research.

At this point the details of the story of Prometheus diverge.  Most of the versions follow a common theme however.  Mr. Currey was using a boring tool to study Prometheus’s tree rings when his tool became stuck. Efforts to remove it then broke it off deep in the trunk. One version of the story is that Currey was unable to get a replacement tool in time to finish the season, so he asked the Forest Service for permission to cut the tree down. Another version has the Forest Service offering to cut the tree down.

Permission was granted.  This was not without some challenges however. The first tree feller refused to fell the tree, citing its unique nature and age.  There were others who voiced serious concerns over the killing of Prometheus. And more would have objected had they known of the plans. Eventually they found a willing tree feller and Prometheus was cut eight feet above where it had germinated. Afterwards, the tree was cut into slabs and those were sent to several research facilities for evaluation. The first person to analyse one of these slabs was Donald Currey.

Mr. Curry’s first task was to count the growth rings on the slab he was analyzing. The first day he counted over a thousand. The next day his count passed 3000, and he began to feel sick. One can only imagine the pit he must have felt in his stomach as he counted the tree rings well past 4000. It must have been awful to realized he had just killed the oldest living thing.

It took some time for the world to realize what had happened in this remote place. The Wheeler Peak bristlcones had eclipsed their cousins in the White Mountains of California. The oldest living tree had been chopped down, and it actually lived in Great Basin National Park.

There was a substantial outcry. As accusations flew, Donald Curry was attacked and many versions of what actually happened began to circulate. Currey himself was wrecked. The loss of Prometheus changed his career. He refused to work with living things after that, and became very private.  Once, while being interviewed about unrelated research, he literally ran away from a reporter when he was identified as the man who killed the oldest living thing.  I believe his actions support the idea that he really had no idea about the age of the tree. But he was fully aware of what an affront this act was to science, research and environmental preservation. The killing of Prometheus had a profound effect on him.

This is a sad story. It is a tale with many human elements: arrogance, integrity, ignorance, curiosity, impulsiveness and hubris.  This also makes it is a story of great value.

It was dark when we finally reached our destination, Great Basin National Park. I had only discovered a small part of this story and I was excited to explore the landscape and learn more.  The next morning we drove to the end of the road, which is just below 10,000′.  I set out alone, up a narrow winding trail to learn more of the story of Prometheus.  I hoped even to find the stump.

The trail was a rocky path that led into the shadow of Wheeler Peak. It was an interpretative trail and as I went, I eagerly read the various plaques about the environment, animals and plants. I knew soon I would learn more about the oldest living thing, and the epic tale that had played out here fifty two years before. But there was no mention of Prometheus. I looped the trail twice thinking I had missed the sign.  But nothing, not a single word about any of it.  When I got back to the camping/picnic area I searched everywhere for some mention of Prometheus, but there was nothing. The killing of the oldest living thing had become a secret.

It was fortunate to find the tale of Prometheus right before staying at Great Basin National Park. The story piqued my curiosity and inspired me to go look for the old tree and learn more.  As I searched the park in vain for more information I was more aware of my environment. The tale helped me find a deeper reverence for the ancient groves and high country where they lived. I was reminded of the history of those who had come before. And this started me thinking about those who would come after.

The Park Services’ argument for keeping Prometheus a secret is that people will come and do more damage looking for the tree and taking souvenirs.  This has happened many times making it a very real concern. They may have other reasons to try and erase the memory of the killing of Prometheus. The most benign and likely is apathy.  Regardless, the failure of the Park Service to acknowledge and embrace this tale guarantees that it will be repeated.  And worse, institutional secrecy has eliminated the best stewards of this land.

For an eternity we have protected and enhanced many places and things by educating people.  And as there are more and more of us, the likelihood of people looking for, finding and defiling our natural treasures for fun and profit seems increasingly likely. The agencies charged with protecting these treasures often are the ones who allowed the damage in the first place. So the final line of defense are the people who pay for the protection and upkeep of our public lands. Our best stewards are the public, in who’s best interest it is to preserve and protect our treasures. 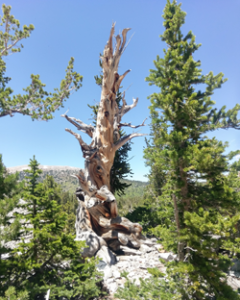 This is a cautionary tale. It teaches and serves as a warning to others and reminds us of the principles guiding science and exploration.  The telling of this saga connects us to the land and to each other. It connects our past to our present, and its message will shape our future. The story fosters appreciation and accountability for the creatures and plants that we share this world with.  The retelling of the events leading up to the killing of Prometheus, (and after), present opportunities. It presents a chance to encourage thoughtfulness, to highlight the scientific process, to promote discussion about responsibility and teach principles. In short, it is a teachable moment.

So the story of Prometheus continues.  Will this ancient tree disappear from the landscape of our memory? Or will it continue as a verbal and written history of the messy business of humanity finding its way through the universe?

We don’t know those answers yet. However, because of Prometheus I have come to believe in the process of telling stories about the places we visit. Sharing the myths, the histories and the science can only bring us closer to the land and its inhabitants.  With this connection comes accountability and stewardship and we can begin to become the voice for those who have no voice.

This story has been covered in several forms.  Here are some links if you would like to learn more.  RadioLab.org did a segment on Prometheus, and is well worth a listen.  Wikipedia, as always, is an excellent jumping off point for research.  Happy hunting!

Tell Us Your Stories